Where is my cabana boy? My glass is waiting for some fresh ice cubes.….

A chunk of ice the size of the Isle of Man has started to break away from Antarctica in what scientists say is further evidence of a warming climate.

Satellite images suggest that part of the ice shelf is disintegrating, and will soon crumble away.

The Wilkins Ice Shelf has been stable for most of the last century, but began retreating in the 1990s.

Six ice shelves in the same part of the continent have already been lost, says the British Antarctic Survey (BAS).

Professor David Vaughan of BAS said: “Wilkins is the largest ice shelf on the Antarctic Peninsula yet to be threatened.

“I didn’t expect to see things happen this quickly. The ice shelf is hanging by a thread – we’ll know in the next few days or weeks what its fate will be.”

Gah! Well that was fun! Thankfully mostly past us now….. patio has a three inch drain – which flooded out. It’s finally draining, I think….

(That big red dot there is Poway underwater)

This is really crazy weather for us…. La Nina is certainly one for unusual weather!

If you can afford a donation, these folks need some help…..

Monkeyfister
The Toll Is At 54 And Rising…

Tragic. I pray that peace, kindness and hope can find each and every one of those touched families.

I’ve been looking around for some local centralized relief group/agency… Someplace.

Right now, I recommend the:

They take DIRECT donations, so you can skip all the National-level waste and delay, AND they serve nearly every community in the effected radius.

I don’t ask for much from my readers, but I sure would appreciate some link love on this post– or better yet– if you’d work-up something of your own linking to the Mid-South Red Cross Chapter to help this area get back on it’s feet, re-building, and healing. It’d mean an awful lot to many. A bit of a small-blog swarm would be a mighty thing.

While the problems of consumer culture have spread worldwide, America holds a unique place in the scheme that Annie dates back to decisions that we made at the outset of the Industrial Revolution. In some countries, people chose to take advantage of increasing productivity to reduce the work week, to take more vacations, and enjoy more time with family and friends. But in America, every gain was turned into a material gain, into more stuff. Rather than gathering in more happiness and freedom from advancing technology, we buried ourselves in an ever accelerating quest for the latest goodies. Generation by generation, year by year, we’ve accumulated more goods and consumed more of the world’s resources (and made ourselves more miserable).

It’s a problem that’s perpetuated today by everything from the way we’re entertained to the way we’re educated. Where once we practiced “keeping up with the Joneses” by comparing ourselves to our neighbors, television has provided a window on consumer paradise where part-time baristas own huge Manhattan apartments and office workers dress in the latest designer duds. We’re no longer happy to compare our possessions with the couple down the street, we have to compete with Brad and Angelina. We don’t want what our friends have, or what our parents had, we want what Oprah has. This “vertical expansion of the reference group” means we can never reach our goals and are always left feeling as if we’ve failed. The only solution to our inadequacy? Go shopping for more stuff!

Shopping has become the key to how we view ourselves to such an extent that not only did George W. Bush urge us to shop ourselves out of the peril of 9/11, even environmental activists often turn to the mall. What’s the most frequent advice dispensed to people trying to behave more responsibly? Buy green. It’s advice that not only encourages still more consumption as means to address the problem of over-consumption, but it all too often ignores the market forces that have delivered “green” products to the local mall — forces that rarely have any concern for the resources or people damaged along the way.

As we worry about the current economic downturn, even the way we attempt to measure our problems reflects this distorted shopaholic culture. Take a primal forest, kick out the people who have lived there for generations, cut down the trees, slice them into pieces, soak them in toxic chemicals, turn them into disposable products, and ship the discarded remains off to a landfill. On the business page of your local paper or the glitzy stock channel on your television, each of those steps has the same name: growth. What’s a recession? Lack of growth. How do we end a recession? Stimulate spending on more disposable items, so we can buy more disposable goods, so we can cut down more forests, so we can have more… growth.

But if the first part of Annie’s film is devoted to describing the problems of our current unsustainable culture of disposable goods, it’s the final part that deserves special attention. Rather than stopping with the bad news, Annie shoots straight on into the good — we can change. The most engaging part of her description of our society is that everyone can find their place in the flow, and the same dynamic means that everyone is positioned to help change how things work. Environmental issues, social justice, and economics all play into making the change toward a fair, sustainable society. There are as many ways to insert yourself into the process as there are products on the shelves of the local big box store.

My favorite tip from the site:

Buy Green, Buy Fair, Buy Local, Buy Used, and most importantly, Buy Less. Shopping is not the solution to the environmental problems we currently face because the real changes we need just aren’t for sale in even the greenest shop. But, when we do shop, we should ensure our dollars support businesses that protect the environment and worker rights. Look beyond vague claims on packages like “all natural” to find hard facts. Is it organic? Is it free of super-toxic PVC plastic? When you can, buy local products from local stores, which keeps more of our hard earned money in the community. Buying used items keeps them out of the trash and avoids the upstream waste created during extraction and production. But, buying less may be the best option of all. Less pollution. Less Waste. Less time working to pay for the stuff. Sometimes, less really is more.

After weathering nearly five years of war, Baghdad residents thought they’d pretty much seen it all. But Friday morning, as muezzins were calling the faithful to prayer, the people here awoke to something certifiably new.

For the first time in memory, snow fell across Baghdad.

Although the white flakes quickly dissolved into gray puddles, they brought an emotion rarely expressed in this desert capital snarled by army checkpoints, divided by concrete walls and ravaged by sectarian killings — delight.

“For the first time in my life I saw a snow-rain like this falling in Baghdad,” said Mohammed Abdul-Hussein, a 63-year-old retiree from the New Baghdad area.

“When I was young, I heard from my father that such rain had fallen in the early ’40s on the outskirts of northern Baghdad,” Abdul-Hussein said, referring to snow as a type of rain. “But snow falling in Baghdad in such a magnificent scene was beyond my imagination.”

Morning temperatures uncharacteristically hovered around freezing, and the Baghdad airport was closed because of poor visibility. Snow is common in the mountainous Kurdish areas of northern Iraq, but residents of the capital and surrounding areas could remember just hail.

Yeah, no such thing as climate change….

At least 28 people are reported to have died in Iran’s heaviest snowfall in recent years.

Although most have now been rescued, another 20 people are reported to have died in car crashes caused by the weather, officials said.

Tehran has declared two days of national holiday, urging people to stay at home to avoid the bitter cold.

The temperature has been down as low as -24 degrees Celsius, and for the first time in living memory there has been snow in the country’s southern deserts. 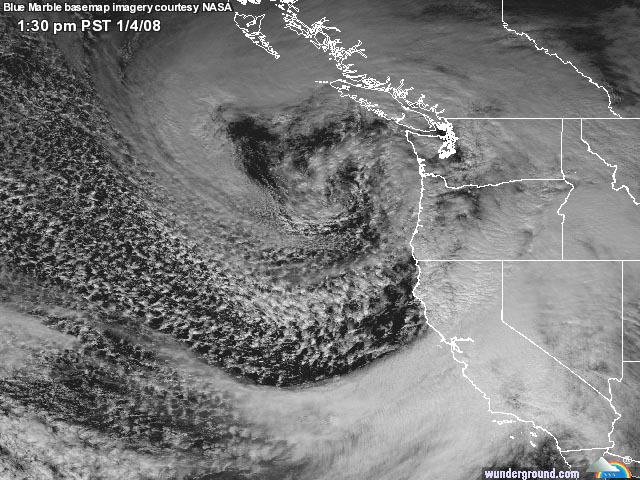 Hasn’t hit us here yet in San Diego, and we will probably get the least severe weather, but this is a HUGE storm. Well a good Sierra snow pack will help our water situation at least.

If you’re in California this weekend, stay safe, warm and dry….

A mighty hurricane-force Pacific storm continues to clobber California with blizzards, damaging winds, and flooding rains. Hardest hit are the Sierra Mountains, where winds at Ward Mountain near Lake Tahoe were 86 mph, gusting to 163 mph, at 11 am PST. The storm responsible is visible just off the coast of Washington (Figure 1), and has a central pressure near 960 mb–similar to that of a Category 2 hurricane. Blizzard conditions will continue over much of the Sierras, with 2-5 feet likely to fall by Saturday. Travel will be difficult of impossible in the northern mountains of California Friday and Saturday. Snow amounts may reach 10 feet by Monday in some mountain regions of California.

We didn’t get very much rain from this storm here in San Diego. Northern California got most of the high winds, snow and flooding. Heavy rains and a broken levee created flooding in one Nevada town. Here’s the latest from Wunderground:

Heavy snow, flash floods, and damaging winds continue to pound California today as a weakening Pacific storm moves inland over British Columbia. The winds have died down considerably in the Sierra Mountains, where hurricane force winds were common on Friday. The storm’s highest winds occurred at Ward Mountain near Lake Tahoe–sustained at 110 mph, gusting to 163 mph, on Friday. Prodigious snow amounts of up to six feet have fallen in the Sierras, with Blackcap Basin in Fresno County (elevation 10300 feet) reporting 71.3 inches (5.9 feet) of new snow as of 4 am PST Saturday. Continued heavy snows are expected in the Sierras through Sunday, with total amounts up to ten feet possible.

At lower elevations, heavy rain has triggered flash floods. In Chino Hills, just east of Los Angeles, a flash flood swept away a vehicle that had gone around a barricade. One occupant was found hypothermic and clinging to a tree, but the vehicle and its other occupant are missing. A mudslide forced the temporary closure of Interstate 15 nearby. Rain amounts exceeding ten inches (Figure 1) have fallen in the mountains of Central and Northern California, and in Nevada, heavy rains caused a levee to burst along the Truckee Canal in Fernley, flooding hundreds of homes.

Seems to be an anomaly since the rest of the week is forecast with lows in the 40s….