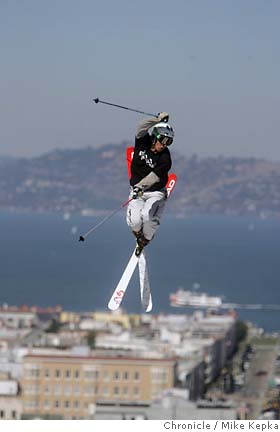 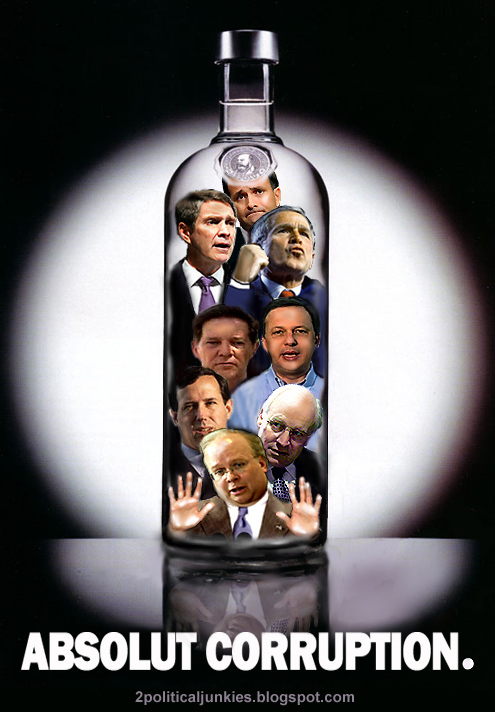 Had one of those lovely “Christian” women with the stupid ribbon magnets on her car decide I had cut her off pulling out of the grocery store parking lot and decide to zip past me in the same lane. Fortunately, I saw her coming and stayed over enough for her to get by. Why is it always these assholes who are the most inconsiderate people on the road? Why is everyone else supposed to live to their “values”, when it is obvious they have none, really?

Sorry, just in a really bad mood today since a friend sent the sad news that her brother-in-law passed away last night, which put me in a dark mood for the morning. I thought I just felt bad for her family, and then realized – it’s been two years this week since my mom died. Ah, that explained the funk I’ve been in all week long. The body always, always remembers, even when things are not in our conscious thoughts.

Tell you what, people. If you really want to support the troops, fight for their damn medical care when they get home. My own brother-in-law, a former Marine, suffers leukemia and a bum leg from a terrorist attack, and post traumatic stress disorder. But he can’t get a full disability from our wonderful veteran’s administration, and his doctors here in San Diego basically wrote him off last year for the leukemia. Fortunately they moved to Tucson and the good doctors there have him in full remission. It doesn’t take much to find as many similar or worse stories of lack of care and coverage on the Internets. You want to support these guys? Quit buying magnets from China, and write your congress creatures a letter about the crappy care these soldiers get when they get back. That’s how you support the troops, folks. Get them decent pay and benefits, don’t put a friggin’ magnet on your car.

And don’t drive like an asshole if you do – it pisses the rest of us off. 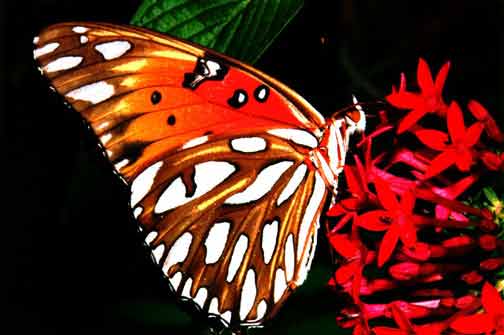 Lady butterfly,
I saw you a week ago.
Now you are back,
with your lover,
In tandem flights
And helical tangents:
How many times
You return gladly!

In the legends there is the story of the butterfly lovers. The loved each other so much that even in death, their hearts were fixed faithfully upon one another. In honor of their devotion to each other, the gods changed them into butterflies and let them come back together in reincarnation after reincarnation.

Would that all of us could manifest such determination and faith to what we love!

A friend of mine was growing passion flower vines and became annoyed at all the little holes that were being eaten with. She wondered what she could spray them with, and I said, “Oh, don’t do that! Those are holes from butterfly caterpillars feeding on them. If you destroy them, you won’t have all these gorgeous butterflies around!” So she fell in love with butterflies, gained a new hobby of studying them, and now grows even more native plants and other butterfly flowers instead of just her roses, and introduced me to how to grow roses organically. It seemed to be a good exchange.

I have an entire wall outside my house covered with passion flowers and butterflies right now. I love to go out in the garden and see them flitting about, watch the butterflies enjoying their new wings, and hunt for the little caterpillars. The big carpenter bees have also taken a love to these flowers. From all this exuberance, there is one passion fruit on the entire mess of vines. And the dogs will probably find that and pull it off to play with it.

GOP- The Culture of CORRUPTION.

Rep. Blunt and his staff have close connections to uber-lobbyist Jack Abramoff, who is the subject of criminal and congressional probes. In June 2003, Mr. Abramoff persuaded Majority Leader Tom DeLay to organize a letter, co-signed by Speaker Hastert, Whip Roy Blunt, and Deputy Whip Eric Cantor, that endorsed a view of gambling law benefitting Mr. Abramoff’s client, the Louisiana Coushatta, by blocking gambling competition by another tribe. Mr. Abramoff has donated $8,500 to Rep. Blunt’s leadership PAC, Rely on Your Beliefs.

If, as it appears, Rep. Blunt was accepting campaign contributions from Mr. Abramoff in exchange for using his official position so support a view of gambling law that would benefit Mr. Abramoff’s client, he would be in violation of the law.

Mr. DeLay was indicted on one count charging that he violated state election laws in September 2002. Two political associates, John D. Colyandro and James W. Ellis, were indicted with him.

I give up. This country is officially totally fucked up beyond all belief.

Cindy Sheehan, the grieving California mother of a soldier slain in Iraq, was arrested today while protesting the Iraq war outside the White House.

Sheehan, whose 24-year-old son Casey was killed last year, and several dozen other protesters staged a sit-in on the sidewalk on Pennsylvania Avenue after marching along the pedestrian walkway, the Associated Press reported. Police warned them three times that they had to move along before making arrests, the news agency said.

Anti war demonstrators hold up signs as they march in front of the White House Saturday, Sept. 24, 2005 in Washington.

“The whole world is watching,” protesters chanted as Sheehan was led to a police vehicle.

Sheehan and some 200 other protesters sat in circles on the sidewalk, apparently courting arrest. Hundreds more people rallied in Lafayette Park, across Pennsylvania Avenue.

Sheehan’s arrest came after a massive antiwar demonstration Saturday in Washington which drew more than 100,000 people — the largest such demonstration since the Iraq war began in spring 2003. A demonstration supporting the war drew roughly 500 people Sunday.

Sheehan, 48, first attracted wide attention in August when she established the antiwar “Camp Casey” outside of President Bush’s Texas ranch. As part of the 26-day protest in Crawford, Sheehan asked for a meeting with Bush, which he declined. 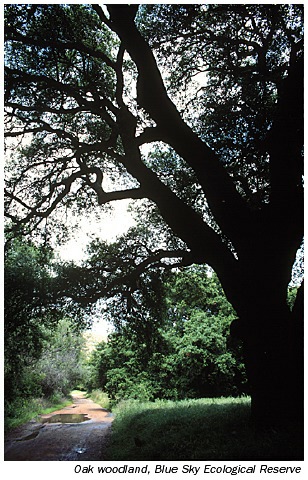 My back is stooped from scholarship,
My eyes are dimmed by history’s words.
Surrounded though I may be by learning,
I still cannot compare with nature’s perfection.

Learning is a passion shared by many of us. There is a great allure to education and a fascination with the accomplishments of civilization. We go to libraries and museums. We go to exhibits showing the diggings from royal tombs. We are enchanted with new inventions. And yet, if we look out our windows and see a tree in its perfection, or gaze into a tide pool, or watch a cat as it strolls its territory, or see the flash of a blue jay, we can see another order of beauty and intelligence in this life.

The works of humanity cannot compare to the works of nature. The works of civilization lack the balance and refinement of nature. Too many times, our accomplishments are tainted by impure motives : profit, hardship, desire for fame, simple greed. We achieve, but we cannot foresee the results because we are unable to place our actions into a greater context.

Nature is a conglomeration of contending forces, of tooth and claw, venom and perfume, mud and excrement, eggs and bones, lightning and lava. It seems chaotic. It seems terrible. And yet, for all its unfathomable workings, it far surpasses the business of our society.

Think about what you do. How much of it can compare to the perfection of nature?

“Look deep into nature, and then you will understand everything better.”
— Albert Einstein

“In nature we never see anything isolated, but everything in connection with something else which is before it, beside it, under it and over it.”
— Johann Wolfgang von Goethe

“To the dull mind nature is leaden. To the illumined mind the whole world burns and sparkles with light.” — Ralph Waldo Emerson

“The goal of life is to make your heartbeat match the beat of the universe, to match your nature with Nature.” — Joseph Campbell

Our morning walk with the dogs today was out to Blue Sky Preserve. Walking among the beautiful old oaks is a really pleasant way to spend the morning and admire the beauty of nature. It was assuming to watch some people cut themselves off still from the nature they were supposedly enjoying, with headphones, cell phones, running quickly instead of enjoying a stroll through the old oaks, or loud chatter to their walking partners instead of simply enjoying what was around them.

I wonder sometimes if people even know there is nature to be enjoyed. It seems they are often so wrapped up in themselves they forget there even is anything else. Why is it so hard to just enjoy the world as it is, instead of trying so hard to make ourselves and what is around us something more? 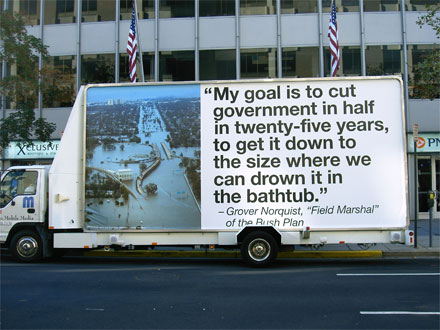 Working Assets, an organization that “helps busy people make a difference” organized an event that showed just how crude and dangerous Mr. Norquist’s ideas about government really are. Activists rented a truck whose cab was flanked by two twin billboards, featuring Field Marshal Norquist’s famous quote juxtaposed with an image of the aftermath of Hurricane Katrina – a drowned New Orleans. Appropriately, at 8:45 this morning Working Assets parked the truck in front of the offices of Americans for Tax Reform, an essential part of Norquist’s New Right brigade, and the meeting place for that weekly breakfast strategy session of rightist revolutionaries.

With the conspicuous truck parked squarely in front of Americans for Tax Reform’s locked-down offices, a sizeable handful of activists, with original chants that point to America’s shameful standards in high school English curricula, courted media photographers while making their presence known to the planners of the watery death of American government. “246810 What if a hurricane comes again? 13579 Your rich friends will be just fine.” Someone missed that 9th grade lesson on meter.

Heh. I like this kind of protest – smart, effective, and right where they work. You rock, guys….