No One But Us
by Annie Dillard

There is no one but us.
There is no one to send,
Nor a clean hand,
Nor a pure heart
On the face of the earth,
Nor in the earth
But only us,
A generation comforting ourselves
With the notion
That we have come at an awkward time,
That our innocent fathers are all dead –
As if innocence has ever been –
And our children busy and troubled,
And we ourselves unfit, not yet ready,
Having each of us chosen wrongly,
Made a false start, failed,
Yielded to impulse
And the tangled comfort of pleasures,
And grown exhausted,
Unable to seek the thread,
Weak, and involved.
But there is no one but us.
There never has been.

From the book Holy the Firm by Annie Dillard 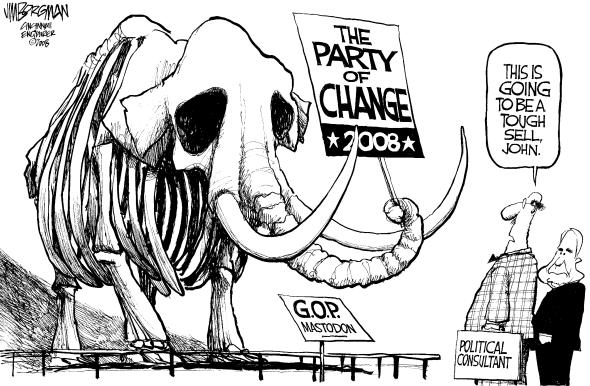 When embracing the unity
Of mind, body, emotions, and spiritual being
Can we transcend our fragmentations
Without leaving a trace?

When Qi Gong sculpts new suppleness,
Can our flesh become soft as a new born babe?

Can we cleanse the inner vision,
leaving mind in spiritual purity?

Can the gate to Yin be opened
Without inviting Yang?

Can our reasoning be purged of coercion,
allowing our heart its unfettered joy?

Can we act like every other species
Seeking no reward,
Taking no pride,
Guiding without enslaving?

Such is our vision of the Great Integrity
On whose path we have at last planted both feet,
Ready to Move, step by step,
Until we arrive at the great unfettered gate.

Something to bear in my nmind when you see McCain referred to as a “Maverick”:

I went and actually looked up “maverick” today. It is fairly new, named after Samuel A. Maverick (died 1870) American pioneer who did not brand his calves. Date: 1867. “1: an unbranded range animal; especially : a motherless calf”. That was Merriam-Webster. Another online dictionary (WordNet) says “(an unbranded range animal (especially a stray calf); belongs to the first person who puts a brand on it)”.

Funny how the original usage of the word implies not stubborn independence, but vulnerability to being branded and claimed by the first person to do so. 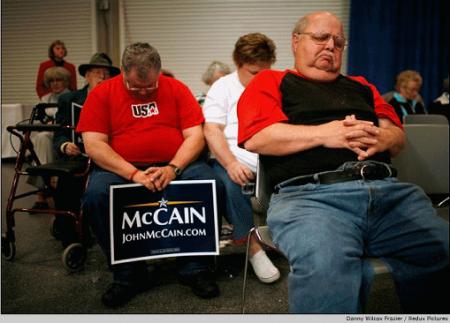 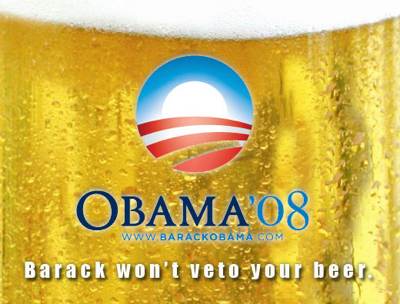 I couldn’t get through this whole article, but you might enjoy it….

Is Google Making Us Stupid?

Over the past few years I’ve had an uncomfortable sense that someone, or something, has been tinkering with my brain, remapping the neural circuitry, reprogramming the memory. My mind isn’t going—so far as I can tell—but it’s changing. I’m not thinking the way I used to think. I can feel it most strongly when I’m reading. Immersing myself in a book or a lengthy article used to be easy. My mind would get caught up in the narrative or the turns of the argument, and I’d spend hours strolling through long stretches of prose. That’s rarely the case anymore. Now my concentration often starts to drift after two or three pages. I get fidgety, lose the thread, begin looking for something else to do. I feel as if I’m always dragging my wayward brain back to the text. The deep reading that used to come naturally has become a struggle….

Actually, yes, I have this problem a lot lately. I have stacks and stacks of books I’ve been meaning to read, that I can’t get through. Some of them I’ve had for a couple of years now. The only time I really read seems to be when I get totally absorbed in a certain writer’s work, which is rare these days for me.

I used to read voraciously, several books a week. Now I’m lucky to get through one a month.

Hotline On Call: “It’s A Google”

“We’re going through a process where you get a whole bunch of names, and ya … Well, basically, it’s a Google,” McCain said. “You just, you know, what you can find out now on the Internet. It’s remarkable, you know.”

Yeah, you can lots of fun with teh Google…. 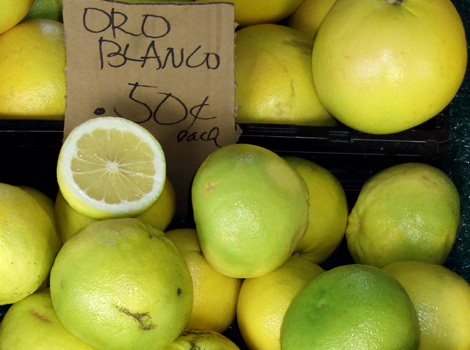 I never used to like grapefruit as a kid. Now, with these organic “Oro Blanco” and “Melo Gold” types, I find I like them. But I neglected to grab my mom’s old grapefruit spoons and grapefruit wedger, so I’m reduced to using a titanium spork to eat them. It works, but not too well…

Anyone know where to find those old-style grapefruit wedgers? You know, the plow-shaped ones that sliced sections so you could eat them easily? I can find the spoons online, but the old-fashioned wedgers seem to have been replaced with new gadgets I don’t really care for. If you know where to find the old ones, or have one you might part with, please leave me a comment and let me know!!

Go read Frank Rich’s whole piece — it’s very insightful. The better half is here, though — it’s a good summary of the choice we face.

WHEN Barack Obama achieved his historic victory on Tuesday night, the battle was joined between two Americas. Not John Edwards’s two Americas, divided between rich and poor. Not the Americas split by race, gender, party or ideology. What looms instead is an epic showdown between two wildly different visions of the country, from the ground up.

On one side stands Mr. Obama’s resolutely cheerful embrace of the future. His vision is inseparable from his identity, both as a rookie with a slim Washington résumé and as a black American whose triumph was regarded as improbable by voters of all races only months ago. On the other is John McCain’s promise of a wise warrior’s vigilant conservation of the past. His vision, too, is inseparable from his identity — as a government lifer who has spent his entire career in service, whether in the Navy or Washington.

Given the dividing line separating the two Americas of 2008, a ticket uniting Mr. McCain and Hillary Clinton might actually be a better fit than the Obama-Clinton “dream ticket,” despite their differences on the issues. Never was this more evident than Tuesday night, when Mrs. Clinton and Mr. McCain both completely misread a one-of-a-kind historical moment as they tried to cling to the prerogatives of the 20th century’s old guard.

All presidential candidates, Mr. Obama certainly included, are egomaniacs. But Washington’s faith in hierarchical status adds a thick layer of pomposity to politicians who linger there too long. Mrs. Clinton referred to herself by the first-person pronoun 64 times in her speech, and Mr. McCain did so 60 times in his. Mr. Obama settled for 30.

Remarkably, neither Mrs. Clinton nor Mr. McCain had the grace to offer a salute to Mr. Obama’s epochal political breakthrough, which reverberated so powerfully across the country and throughout the world. By being so small and ungenerous, they made him look taller. Their inability to pivot even briefly from partisan self-interest could not be a more telling symptom of the dysfunctional Washington culture Mr. Obama aspires to mend.

Yet even as the two establishment candidates huffed and puffed to assert their authority, they seemed terrified by Mr. Obama’s insurgency, as if it were the plague in Edgar Allan Poe’s “Masque of the Red Death.” Mrs. Clinton held her nonconcession speech in a Manhattan bunker, banishing cellphone reception and television monitors carrying the news of Mr. Obama’s clinching of the nomination. Mr. McCain, laboring under the misapprehension that he was wittily skewering his opponent, compulsively invoked the Obama-patented mantra of “change” 33 times in his speech.

Mr. McCain only reminded voters that he, like Mrs. Clinton, thinks that change is nothing more than a marketing gimmick. He has no idea what it means. “No matter who wins this election, the direction of this country is going to change dramatically,” he said on Tuesday. He then grimly regurgitated Goldwater and Reagan government-bashing talking points from the 1960s and ’70s even as he presumed to accuse Mr. Obama of looking “to the 1960s and ’70s for answers.”

Mr. Obama is a liberal, but it’s not your boomer parents’ liberalism that is at the heart of his appeal. He never rattles off a Clinton laundry list of big federal programs; he supports abortion rights and gay civil rights with a sunny bonhomie that makes the right’s cultural scolds look like rabid mastodons. He is not refighting either side of the domestic civil war over Vietnam that exploded in his hometown of Chicago 40 years ago this summer, long before he arrived there.

He has never deviated from his much-quoted formulation in “The Audacity of Hope,” where he described himself as aloof from “the psychodrama of the baby boom generation” with its “old grudges and revenge plots hatched on a handful of college campuses long ago.” His vocabulary is so different from that of Mrs. Clinton and Mr. McCain that they often find it as baffling as a foreign language, even as they try to rip it off.

The selling point of Mr. Obama’s vision of change is not doctrinaire liberalism or Bush-bashing but an inclusiveness that he believes can start to relieve Washington’s gridlock much as it animated his campaign. Some of that inclusiveness is racial, ethnic and generational, in the casual, what’s-the-big-deal manner of post-boomer Americans already swimming in our country’s rapidly expanding demographic pool. Some of it is post-partisan: he acknowledges that Republicans, Ronald Reagan included, can have ideas.

Opponents who dismiss this as wussy naïveté do so at their own risk. They at once call attention to the expiring shelf life of their own Clinton-Bush-vintage panaceas and lull themselves into underestimating Mr. Obama’s political killer instincts.

The Obama forces out-organized the most ruthless machine in Democratic politics because the medium of their campaign mirrored its inclusive message. They empowered adherents in every state rather than depending on a Beltway campaign hierarchy whose mercenary chief strategist kept his day job as chief executive for a corporate P.R. giant. Such viral organization and fund-raising is a seamless fit with bottom-up democracy as it is increasingly practiced in the Facebook-YouTube era, not merely by Americans and not merely by the young….