Today is one of those days. Life moves on, and there is nothing we can do.

Today I have to be there for others. Provide the support, provide the understanding.

Interesting ideas for wabi sabi as applied to web design

“Wabi Sabi is simple… Anyone can benefit from the ideals of Wabi Sabi, just as any kind of fruit becomes sweeter from the rays of the sun. The sun doesn’t add sugar; the sugar is already in the fruit. The sun only helps reveal it. In this way, your philosophy of life is like the fruit, and Wabi Sabi is like the sun making sweeter what was already there… It’s what we do today with our knowledge of the past that matters. I want you to see how to apply Wabi Sabi here and now. I want you to know how living Wabi Sabi can transform your life, now and in the future. Like sugar from the sun.” — Taro Gold, Living Wabi Sabi

Getting into some new meditation CDs and doing some guided meditations — anyone have any favorites that have been good for you?

In describing the movement of metamorphosis in the foliage of a flowering plant, Friedemann Schwarzkopf (in his The Metamorphosis of the Given: Toward an Ecology of Consciousness), suggests that “…if one could imagine a person walking through the snow, and leaving the imprints of its feet, but with every step changing the shape of its feet, and if one would behold not the trace in the snow, perceptible to the sense-organs of the physiological eyes, but the living being that is undergoing change while it is walking, one would see with the inner eye the organ of the plant that is producing leaves.”

And what of the lesson for the photographer? If only we could see the world as Schwarzkopf – and Goethe – suggest we see a plant! The inner creative process that drives what we do (why and what we choose to look at, what moves us, what grabs our attention and demands to be expressed) is just as much a living force as what we train our lenses on in the world at large. I would argue that in order to become better – more impassioned, more sincere, more artfully truthful – artists, requires a more Goethian approach; it requires us to learn how to dwell in our subjects. Don’t focus on objects or things; focus instead on process.

via Tao of Photography: Sting, Goethe, and the Creative Process.

No more being the ugly duckling, people. It’s time for all of us to shine our brightest…. 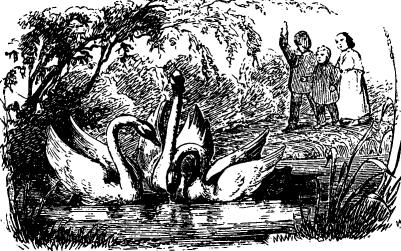 IT was lovely summer weather in the country, and the golden corn, the green oats, and the haystacks piled up in the meadows looked beautiful. The stork walking about on his long red legs chattered in the Egyptian language, which he had learnt from his mother. The corn-fields and meadows were surrounded by large forests, in the midst of which were deep pools. It was, indeed, delightful to walk about in the country. In a sunny spot stood a pleasant old farm-house close by a deep river, and from the house down to the water side grew great burdock leaves, so high, that under the tallest of them a little child could stand upright. The spot was as wild as the centre of a thick wood. In this snug retreat sat a duck on her nest, watching for her young brood to hatch; she was beginning to get tired of her task, for the little ones were a long time coming out of their shells, and she seldom had any visitors. The other ducks liked much better to swim about in the river than to climb the slippery banks, and sit under a burdock leaf, to have a gossip with her. At length one shell cracked, and then another, and from each egg came a living creature that lifted its head and cried, “Peep, peep.” “Quack, quack,” said the mother, and then they all quacked as well as they could, and looked about them on every side at the large green leaves. Their mother allowed them to look as much as they liked, because green is good for the eyes. “How large the world is,” said the young ducks, when they found how much more room they now had than while they were inside the egg-shell. “Do you imagine this is the whole world?” asked the mother; “Wait till you have seen the garden; it stretches far beyond that to the parson’s field, but I have never ventured to such a distance. Are you all out?” she continued, rising; “No, I declare, the largest egg lies there still. I wonder how long this is to last, I am quite tired of it;” and she seated herself again on the nest…..

There is probably no better or more reliable measure of whether a woman has spent time in ugly duckling status at some point or all throughout her life than her inability to digest a sincere compliment. Although it could be a matter of modesty, or could be attributed to shyness — although too many serious wounds are carelessly written off as “nothing but shyness” — more often a compliment is stuttered around because it sets up an automatic and unpleasant dialogue in the woman’s mind.

If you say how lovely she is, or how beautiful her art is, or compliment anything else her soul took part in, inspired, or suffused, something in her mind says she is undeserving and you, the complimentor, are an idiot for thinking such a thing to begin with. Rather than understand that the beauty of her soul shines through when she is being herself, the woman changes the subject and effectively snatches nourishment away from the soul-self, which thrives on being acknowledged, on being seen.

So that is the final work of the exile who finds her own: to not only accept one’s own individuality, but also to accept one’s beauty… the shape of one’s soul and the fact that living close to that wild creature transforms us and all that it touches.

When we accept our own wild beauty, it is put into perspective, and we are no longer poignantly aware of it anymore, but neither would we forsake it or disclaim it either. Does a wolf know how beautiful she is when she leaps? Does a feline know what beautiful shapes she makes when she sits? Is a bird awed by the sound it hears when it snaps open its wings? Learning from them, we just act in our own true way and do not draw back from or hide from our natural beauty. Like the creatures, we just are, and it is right.

— Clarissa Pinkola Estes, Women Who Run With the Wolves

It’s always great when things that were going wrong with your world begin to go right again. I’m feeling really peaceful and enjoying the quiet of the moment and the peace I am feeling. In about a minute I’ll get up to feed the dogs, and they will fill the space with their energy. But this moment, just now, is peaceful and calm.

Hope all is well in your world, too.

I’m finally back from my vacation time in Florida, and have been going through a lot the last couple of weeks and am still sorting it all out. I’ll be back to blogging regularly eventually. It’s been an interesting and challenging time for me, and I’ve been busy making major changes in several people’s lives. Hopefully for the better, but we’ll see in time. With so much changing in our world right now, it feels difficult to keep up the pace, so I’m slowing mine down for a while. Meantime, I’ll post some less intense and more fun things here.

You are The Empress

The Empress is associated with Venus, the feminine planet, so it represents,
beauty, charm, pleasure, luxury, and delight. You may be good at home
decorating, art or anything to do with making things beautiful.

The Empress is a creator, be it creation of life, of romance, of art or business. While the Magician is the primal spark, the idea made real, and the High Priestess is the one who gives the idea a form, the Empress is the womb where it gestates and grows till it is ready to be born. This is why her symbol is Venus, goddess of beautiful things as well as love. Even so, the Empress is more Demeter, goddess of abundance, then sensual Venus. She is the giver of Earthly gifts, yet at the same time, she can, in anger withhold, as Demeter did when her daughter, Persephone, was kidnapped. In fury and grief, she kept the Earth barren till her child was returned to her.

What Tarot Card are You?
Take the Test to Find Out.