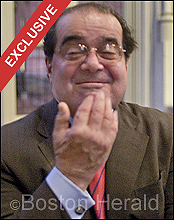 “It’s inaccurate and deceptive of him to say there was no vulgarity in the moment,” said Peter Smith, the Boston University assistant photojournalism professor who made the shot.

Despite Scalia’s insistence that the Sicilian gesture was not offensive and had been incorrectly characterized by the Herald as obscene, the photographer said the newspaper “got the story right.”

Smith said the jurist “immediately knew he’d made a mistake, and said, ‘You’re not going to print that, are you?’ ”

Scalia’s office yesterday referred questions regarding the flap to Supreme Court spokeswoman Kathy Arberg, who said a letter Scalia sent Tuesday to the Herald defending his gesture at the cathedral “speaks for itself.”

Smith was working as a freelance photographer for the Boston archdiocese’s weekly newspaper at a special Mass for lawyers Sunday when a Herald reporter asked the justice how he responds to critics who might question his impartiality as a judge given his public worship.

“The judge paused for a second, then looked directly into my lens and said, ‘To my critics, I say, ‘Vaffanculo,’ ” punctuating the comment by flicking his right hand out from under his chin, Smith said.

The Italian phrase means “(expletive) you.”

So now, the photographer has been fired.

A freelance photographer has been fired by the Archdiocese of Boston’s newspaper for releasing a picture of U.S. Supreme Court Justice Antonin Scalia making a controversial gesture in the Cathedral of the Holy Cross on Sunday.

Peter Smith, who had freelanced for The Pilot newspaper for a decade, lost the job yesterday after the Herald ran his photo on its front page. Smith said he has no regrets about releasing it.
“I did the right thing. I did the ethical thing,” said Smith, 51, an assistant photojournalism professor at Boston University.

Just so typical – blame the messenger. I’m so sick of these jerks who can do anything – make obscene guestures to the American people, break laws and spy on the American people since the laws don’t apply to the President of course, whatever – and those who report on it take the blame.