UPDATE: There is a snowman movie coming out! They are looking for film and photos of snowman if you have any available! Please contact Pam directly and not me. Thanks!

Docutainment Films is seeking content for the upcoming documentary on Snowman & Harry de Leyer.
If you have film/photos/articles about any of the topics below, please contact Pam Aguilar at email pam@docutainmentfilms.com.

This is a post from April 2006 that I’m reposting, since I was just contacted by Elizabeth Letts who is writing a new book about Snowman!  Elizabeth writes:

I am so pleased and excited to see all of these posts about Snowman and Harry de Leyer.

I am currently working on a new full-length book about Snowman and Harry– it is such an inspirational story that I hope a whole new generation will learn about this wonderful tale. The book is currently titled THE CINDERELLA HORSE and it is coming from Random House in 2011. It is a love affair with Snowman, with horse stories, and with the wonderful world of show jumping in the 1950s and the old National Horse Show at Madison Square Garden…

I would LOVE to hear from anyone who has personal memories of Snowman, including anyone who remembers watching him compete. 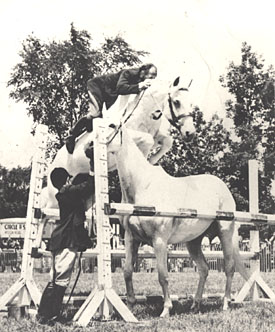 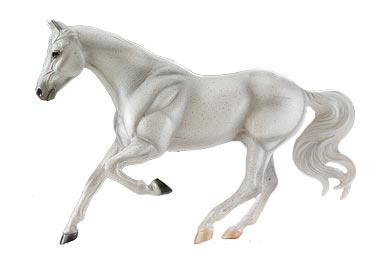 The abundant life is within our reach if only we will drink deeply of living water, fill our hearts with love, and create of our lives a masterpiece.

Harry de Leyer was late to the auction on that snowy day in 1956, and all of the good horses had already been sold. The few that remained were old and spent and had been bought by a company that would salvage them.

Harry, the riding master at a girls’ school in New York, was about to leave when one of these horses—an uncared-for, gray gelding with ugly-looking wounds on its legs—caught his eye. The animal still bore the marks that had been made by a heavy work harness, evidence to the hard life he had led. But something about him captured Harry’s attention, so he offered $80 for him.

It was snowing when Harry’s children saw the horse for the first time, and because of the coat of snow on the horse’s back, the children named him “Snowman.”

Harry took good care of the horse, which turned out to be a gentle and reliable friend—a horse the girls liked to ride because he was steady and didn’t startle like some of the others. In fact, Snowman made such rapid improvement that a neighbor purchased him for twice what Harry had originally paid.

But Snowman kept disappearing from the neighbor’s pasture—sometimes ending up in adjoining potato fields, other times back at Harry’s. It appeared that the horse must have jumped over the fences between the properties, but that seemed impossible—Harry had never seen Snowman jump over anything much higher than a fallen log.

But eventually, the neighbor’s patience came to an end, and he insisted Harry take back the horse.

For years, Harry’s great dream had been to produce a champion jumping horse. He’d had moderate success in the past, but in order to compete at the highest levels, he knew he would have to buy a pedigreed horse that had been specifically bred to jump. And that kind of pedigree would cost far more than he could afford.

Snowman was already getting old—he was eight when Harry had purchased him—and he had been badly treated. But, apparently, Snowman wanted to jump, so Harry decided to see what the horse could do.

What Harry saw made him think that maybe his horse had a chance to compete.

In 1958, Harry entered Snowman in his first competition. Snowman stood among the beautifully bred, champion horses, looking very much out of place. Other horse breeders called Snowman a “flea-bitten gray.”

But a wonderful, unbelievable thing happened that day.

Audiences cheered every time Snowman won an event. He became a symbol of how extraordinary an ordinary horse could be. He appeared on television. Stories and books were written about him.

As Snowman continued to win, one buyer offered $100,000 for the old plow horse, but Harry would not sell. In 1958 and 1959, Snowman was named “Horse of the Year.” Eventually, the gray gelding—who had once been marked for sale to a low bidder—was inducted into the show jumping Hall of Fame.
— Rutherford George Montgomery, Snowman (1962)

For many, Snowman was much more than a horse. He became an example of the hidden, untapped potential that lies within each of us.