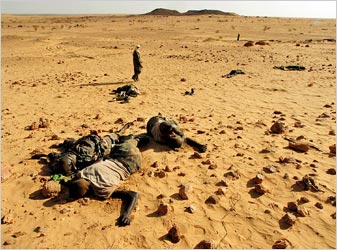 Haroun Abdullah Kabir stepped from one bloodied corpse to another on the parched, rocky battlefield. He searched the soldiers’ decomposing faces for an aquiline nose, fair complexion or fine, straight hair: telltale Arab features.

Instead Mr. Kabir, a field commander of the Darfur rebels fighting the Arab-dominated Sudanese government, found among the Sudanese soldiers his men had felled only the dark-skinned faces of southern Sudanese and Darfurians. He looked away in disgust.

“You see, they send black men to kill black men,” he said. “We are waiting for them to send Arabs for a real fight.”

This is the new battlefield in Darfur, a blood-soaked land in which at least 200,000 people have died since early 2003, many of hunger and disease, as a result of a campaign of violence the Bush administration and others have called genocide.

It’s hard to blog about Darfur. It’s such a sad, vicious and tragic state of affairs. I’m glad on one hand to see it getting media coverage again, but sad that we have still done NOTHING to address what is happening there.

Coalition for Darfur has this story blogged today as well. They blog every day on Darfur, which I can’t imagine doing. Please go there and read a bit today about what ha happened, and more importantly, not happened, in Darfur. There are many links to organizations trying to help where they can, too.

Passion of the Present is another great place to find Darfur news. I used to read this blog and Coalition on a daily basis, and it just became too depressing for me. I read them now when I’m in my stronger moods and can handle the anger and disgust I feel for our government not doing more to aid this area and help resolve these issues. I know America can’t be everywhere doing all that is needed, but we’ve tied up our resources in a mess in Iraq instead of doing so many other things we could be doing. It is disheartening. And hard to see how it can actually get worse, as this NY Times story implies. But maybe I still underestimate human cruelty, much as I underestimated American stupidity in electing an administration that is too heartless to care about the world’s problems and only cares for their own pocketbooks.