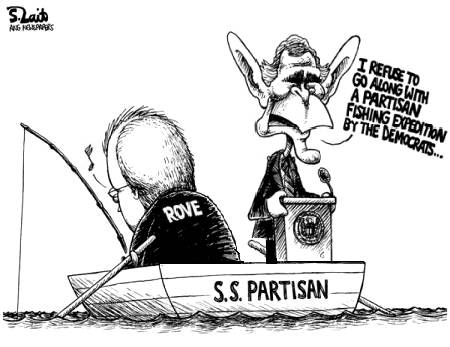 (c) The reason the administration wanted to make Tim Griffin a US Attorney in Arkansas was to send their chief opposition researcher to the state where Hillary Clinton, then the presumptive frontrunner for the Democratic nomination, had spent most of her adult life; and to send him not as a campaign employee but as a US Attorney with subpoena power.

Is this explanation true? I don’t have any evidence of it. I suspect that if it were true, there would not be any evidence. But it makes sense, both because the administration has in fact appointed its chief oppo researcher to the US Attorney’ job in Eastern Arkansas, and because it fits Rove’s modus operandi. (See below.) And if it is, it’s very, very bad.