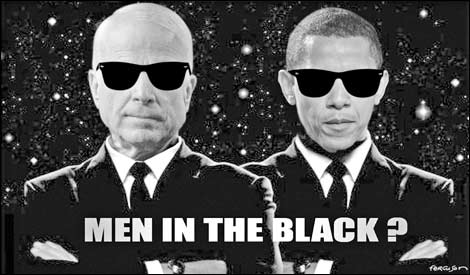 Barack Obama and John McCain both expect the ailing US economy to work to their advantage in November. Mr Obama promises to make things better. Mr McCain says they will get better by themselves and he will not make them worse in the meantime. These are the customary postures of the two parties. For a fight between an insurgent Democrat and a maverick Republican, the economics in this election is sadly orthodox.

Mr Obama offers the usual Democratic remedies for middle-class anxieties and grievances: new tax breaks and spending programmes, higher taxes for the rich, sabre-rattling on trade, calls for stricter regulation of finance and so forth. Mr McCain, likewise sticking to his party’s script, says that with the economy in a hole, this is no time to be raising anybody’s taxes, restricting trade or doing anything else to get in the way of American enterprise.

Aside from being predictable, the two have something else in common: fiscal myopia. Their tax plans differ in their distributional effects, but less than you might think in overall burden. Mr McCain opposed President George W. Bush’s tax cuts as unfair and inefficient; now he wants to make them permanent. Mr Obama deplores them still, of course, and says he will let them expire – but only for the sliver of the population that earns more than $250,000 (€163,000, £128,000) a year.

Measured against current law (ie, against a baseline that assumes the Bush tax cuts expire on schedule in 2011) and excluding healthcare (which involves some additional tax changes) Mr McCain wants to cut taxes by $3,700bn over the next 10 years. Mr Obama wants to cut them by $2,700bn. That amounts to a 10 per cent cut in revenue for Mr McCain and a 7 per cent cut for Mr Obama. (The estimates are from the non-partisan Tax Policy Centre of the Urban Institute and the Brookings Institution.)

If either man gets his way, the larger part of the Bush tax cuts would thus remain on the books. At the same time, both have ambitious plans for new spending – Mr Obama especially. The budget is in structural deficit and the shortfall is bound to worsen as the cost of the Social Security, Medicaid and Medicare programmes rises. Neither candidate addresses the issue. Politically, they are doubtless correct: voters would rather not think about it….