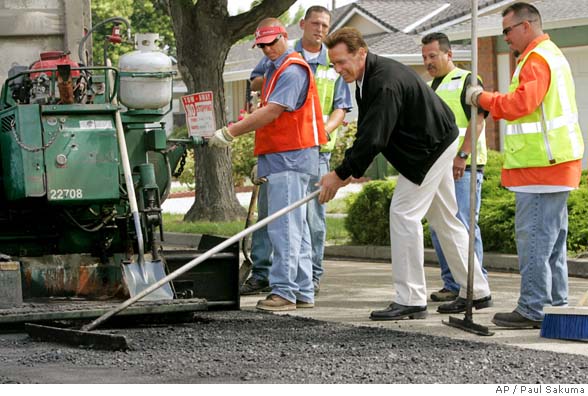 Gov. Arnold Schwarzenegger traveled to a quiet San Jose neighborhood Thursday, and — dogged by protesters — filled a pothole dug by city crews just a few hours before, as part of an attempt to dramatize his efforts to increase money for transportation projects.

The choreographed press opportunity — at least the governor’s fourth recent event involving transportation issues — seemed aimed as much at thwarting the demonstrators who have followed Schwarzenegger for weeks as grabbing new attention for his proposal.

Schwarzenegger strode toward television cameras on Laguna Seca Way to the sounds of the Doobie Brothers’ “Taking it to the Streets,” while flanked by 10 San Jose city road workers wearing Day-Glo vests and work gear. After speeches by the governor and city officials, a dump truck backed up and unloaded a mound of black asphalt and, as television cameras recorded the moment, Schwarzenegger joined the work crew, taking up a broom and filling the 10-by-15-foot hole, later smoothed over by a massive roller truck.

“I’m here today to let everyone know that we’re going to improve transportation all across our state,” said Schwarzenegger, highlighting his proposal to fully fund Proposition 42 and restore $1.3 billion in transportation money to the current state budget.

“For paving the streets, it’s a lot of lighting,” said resident Nick Porrovecchio, 48, motioning to a team of workmen setting up Hollywood-style floodlights on the street to bathe the gubernatorial podium in a soft glow.

Porrovecchio and his business partner, Joe Greco, said that at about 7 a.m. they became fascinated watching “10 city workers standing around for a few hours putting on new vests,” all in preparation for the big moment with Schwarzenegger.

But their street, he noted, didn’t even have a hole to pave over until Thursday morning.

“They just dug it out,” Porrovecchio said, shrugging. “There was a crack. But they dug out the whole road this morning.”

“It’s a lot of money spent on a staged event,” said Matt Vujevich, 74, a retiree whose home faced the crew-made trench that straddled nearly the whole street. “We still have the same problems. Everything’s a press conference.”