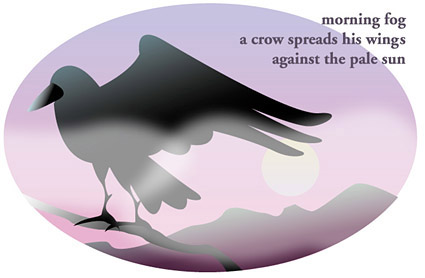 Fog makes the world a painting obscure.
Even close trees are half unseen.
But a lonesome crow won’t stop calling:
He objects to being in this dream.

Over and over, the sages tell us that this world is but a dream.

When one awakes on foggy mornings, with the mists obscuring hills and valleys and the trees and village buildings appearing as diaphanous apparitions, we might even agree with them. Didn’t we see this same uncertain mirage in the hills of Vermont? The hollow of the Yangtze River valley? The streets of Paris? Don’t the memories blend with the dream and turn reality into phantasmagoria?

The world is a dream from which there is no escaping.

In this still dream, there is a crow calling. He doesn’t stop. When everything else is frozen in the sepulchral dawn, the bird continues to scream. Maybe he realizes the same dream. He protests loudly.

The ancients hold the outer reality to be unreal. But there is the inner reality too. Some of us do not readily accept the conditions of this existence. We have eyes to see, but we also have voice to refute the existential delusion.

“All things appear and disappear because of the concurrence of causes and conditions. Nothing ever exists entirely alone; everything is in relation to everything else.” — Buddha

“What if everything is an illusion and nothing exists? In that case, I definitely overpaid for my carpet” — Woody Allen

“Nothing exists except atoms and empty space; everything else is opinion”
— Democritus

“There is no God, no universe, no human race, no earthly life, no heaven, no hell. It is all a dream, a grotesque and foolish dream. Nothing exists but you. And you are but a thought –a vagrant thought, a useless thought, a homeless thought, wandering forlorn among the empty eternities!”
— Mark Twain

“Now it is such a bizarrely improbable coincidence that anything so mind-bog-gglingly useful could have evolved purely by chance that some thinkers have chosen to see it as the final and clinching proof of the non-existence of God.
The argument goes something like this: `I refuse to prove that I exist,’ says God, `for proof denies faith, and without faith I am nothing.’
`But,’ says Man, `The Babel fish is a dead giveaway, isn’t it? It could not have evolved by chance. It proves you exist, and so therefore, by your own arguments, you don’t. QED.’
`Oh dear,’ says God, `I hadn’t thought of that,’ and promptly vanished in a puff of logic.
`Oh, that was easy,’ says Man, and for an encore goes on to prove that black is white and gets
himself killed on the next zebra crossing.”
— Douglas Adams

The problem with arguing about existance is that the evidence is in front of you – things you see, touch, taste, feel, hear. There’s little point in worrying about reality except as a philosophical exercise, which is what turns most people off about philosophy anyway.

It’s fun to look at from a molecular level though, and see that most of what we call real is just empty space, and inside those atoms there is – more empty space. Huh. So when you get down at that level, it’s fun to play with the bits and see what’s really there. On a day-to-day basis though, not so much. We kinda have to deal with what is here and now in our bit of reality.

So, perhaps the best approach is to be like the obnoxious crow, and shout your barbaric yawp already. You’re here, so enjoy it.